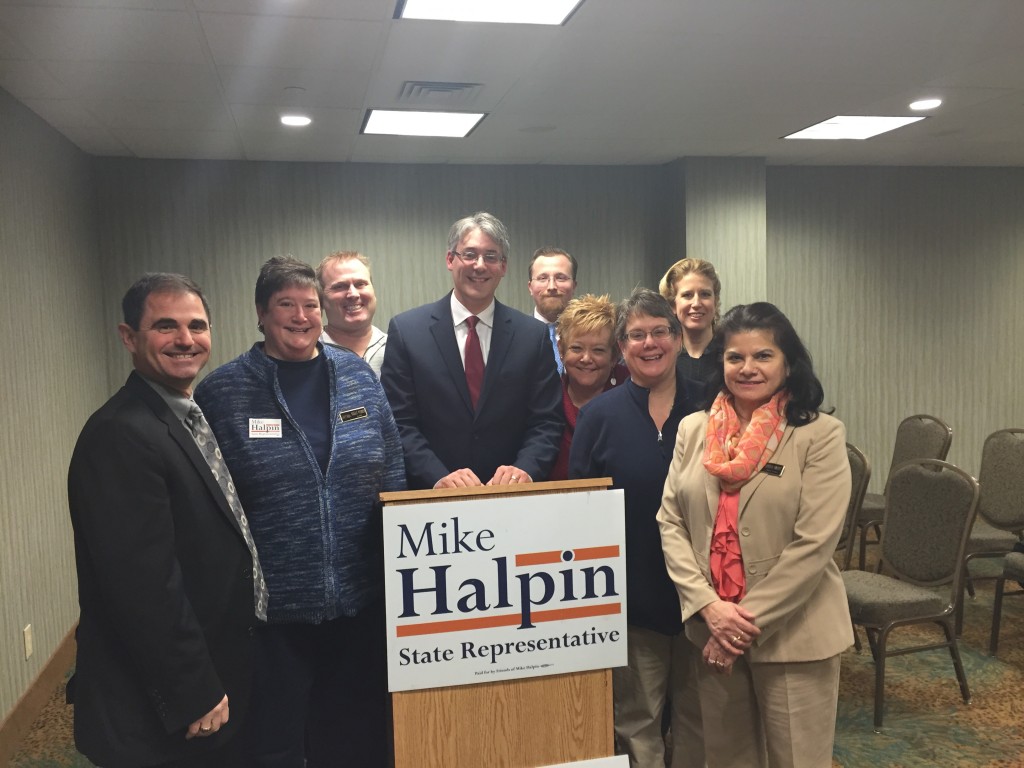 Several of Rock Island County’s Democratic elected officials came together on Tuesday to show their support for Mike Halpin in the closely watched 4-way primary for the Democratic nomination for State Representative. Halpin, a local attorney who works on behalf of injured workers and homeless veterans, served as an aide to former Congressman Lane Evans.

“I am honored to earn the support of many Democrats who share my passion for protecting the middle-class and my commitment to stopping the destructive policies of Governor Bruce Rauner,” Halpin said.  “Time and time again, Rauner has shown little regard for the contributions of working men and women.  He has led our state down a very dark path, and I intend on doing my part to stop him and offer smarter, more well-balanced solutions.”

One issue that has Halpin particularly frustrated is Rauner’s lack of respect for older Illinoisans.

“As Public Guardian for Rock Island County, my job is to advocate on behalf of individuals, mainly senior citizens, who have no friends or family to care for them,” Halpin added.  “I am sickened by the governor’s mistreatment of our elderly neighbors.  He created a plan to kick more than 50,000 elderly residents and disabled persons out of nursing homes, and adult day services are shutting down all over the state, including here in Rock Island County.”

Despite the challenges in facing off against Rauner, those elected officials who joined Tuesday’s press conference, and many others, see hope with Halpin.

“Mike Halpin has earned my vote because he isn’t just interested in making a name for himself—he genuinely cares about our community and building a better future for all of us,” said Karen Kinny, Rock Island County Clerk, “He is a principled man who won’t cave to Governor Rauner and the Tea Party as they try to rip the middle-class to shreds.  He got great training under Lane Evans. I look forward to seeing him stand up for us in Springfield.”

“As a defender of the rights of working families throughout the Quad Cities, I stand with Mike Halpin because I know he stands with us,” said Scott Terry, Rock Island County Board Member, District 21. “Mike will fight to protect retirement security for seniors, raise the minimum wage, and close tax loopholes for companies that ship jobs overseas.”

Halpin resides in Rock Island with his wife MaryAnn and their two children. Halpin can be reached at 309-230-0635, [email protected], on Facebook or via his website, www.halpinforillinois.com.